I know, right! What a huge surprise!

I bet you have a million questions running through your head so let me start at the beginning.

When last we checked in, we were in Bulgaria with some time on our hands, as our visa for Turkey wasn't valid until 01 Aug. so we could get another visa for an earlier entry, or we could find something to keep us busy (like detour through Greece), or both! No prizes for guessing that we went with option C.

Now those of you who have been following our journey will know that Greece was never on our planned route, but we were so close, with time on our hands, and before you can say 'Baklava' the decision was made.

We were a bit hesitant about leaving Bulgaria after slipping in through the border in dubious circumstances, but fortunately had no problems getting out. The Greek border guard did hang out of his little window inspecting our bikes, saying "you're going to Mongolia on that?! Are you sure?!" before welcoming us to his country.

We spent the night in a gorgeous little town called Alexandroupoli and finished our day gorging on octopus, shrimp, calamari, and real Greek salad. The bread was crispy and elastic, and we waddled back to our b&b having eaten enough for a week. It was not to be, however, because at breakfast we were served course after course of delectable dishes, and we rolled out at about 10am ready to hit Istanbul. But one final adventure was a quick swim in the Aegean Sea. I'm collecting Oceans like passport stamps. 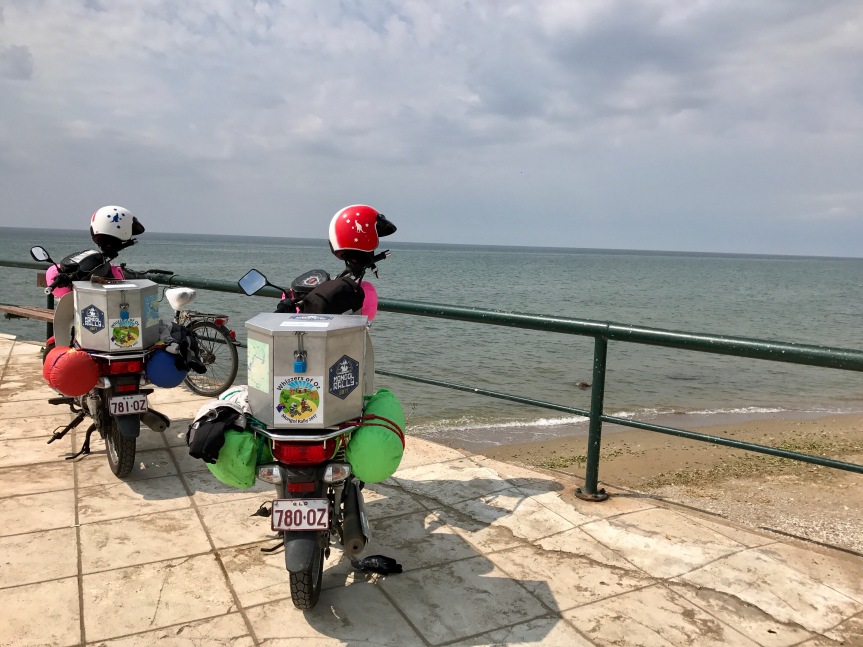 Off to Istanbul and we were at the border before you knew it. We farewelled Greece, drove about 500m into 'no man's land' and hit the first Turkish border control post. This person wanted our vehicle papers and after producing them, he waved us on.

The second check point wanted our passports, and newly acquired visas, which we delivered and were promptly waved on.

The third checkpoint wanted our passports and vehicle papers and our green card insurance. No green card. We were directed to an office between the third and fourth checkpoint where we could buy insurance.

Problem #1 was that the lady selling he insurance spoke almost no English – but her English was still better than our Turkish! She gave us a quote if €112 per bike! Apparently there are 'big problems with motorcycles in Turkey'.
We were horrified! For 7 days! We told her it was very expensive and could she do us a deal. No way, Jose!
We said we would think about it as we didn't have a lot of money and already had insurance in Australia. This is where I believe the 'lost in translation' debacle began.
When we went back to her, still complaining about how expensive it was, she told us that there was a problem with the computer, and that she couldn't sell us insurance, if we were a motor vehicle yes, but for motorcycle no.

We went back to the third border check point to seek assistance. What were our options if they were unable to sell us insurance? Go back to Greece? No, you can't buy insurance for Turkey in Greece.
The border guard insisted we could buy insurance and took us back to the lady. After a conversion between them we didn't understand, the guard 'translated' that we must get our Australian insurer to fax them. We explained it was 9pm in Australia.
He took us to yet another guard, who spoke better English and who was surprised, after his conversation with the first guard, that we wanted insurance. This appeared to be news.
First guard took us back to the insurance lady who said 'now you want to buy?'. She had obviously misunderstood our complaints about the price and already having insurance, as us saying that we didn't want to pay at all, and wanted to rely on our Australian insurance. The whole saga lasted about 3 hours! Finally, we got our insurance (now, somehow €150 per bike!), and took our documents back to checkpoint 3.
Here Peter was told that because both bikes are registered in his name, he needed to have written authority from the Australian consulate granting his wife permission to use the vehicle.

It was a miracle I tell you! At some point between leaving Greece this morning and arriving at the border, we'd tied the knot! Without even realizing it! The more Peter referred to me as his 'partner' the more the guard insisted I was his wife! So we went with it – we will be registering with Meyer and David Jones as soon as we find decent wifi, so please feel free to pick out a nice gift.

Eventually we were led into another official type of building where our border guard humbly asked his supervisor to sign a document he prepared allowing me to ride Peter's bike. At first he was shushed away like a cockroach, then explained his request pointing to is standing nervously at the door, and the documents were signed.

We were finally given the go ahead to proceed to the final checkpoint four, where we were again required to produce our passports and vehicle papers. Finally, we got the wave and we're free!

Let's just say the drive to Turkey was unexpected. The countryside coming into Istanbul was amazing. Such rich agriculture going on. But boy, when we hit Istanbul you could tell 19 million ppl are crammed into this tiny place. It's the worse traffic I've ever seen – even worse than France, and it didn't help that it was bucketing down and we were both drenched. We spent a good few hours in poor light, limited visibility, wet and uncomfortable dodging cars that were at almost a standstill but still adamant they would do their best to kill us. In addition, even small raindrops feel like needles, but I saw it as a free microdermabrasion treatment – until the big drops started to fall which were hitting us so hard I initially thought it was hail!

After a couple of hours we thought bugger Istanbul – let's get as far away from this hell on earth as possible (we later learned the 'rain' had in fact been a major weather event which caused severe flooding). We detoured and tried to leave the highway, but even small back roads were clogged with traffic. We continued heading East until we found a hotel, which looked very posh. But by now it was almost 9pm, we were exhausted from 300km in terrible weather and more than three hours detained at border control (never mind the stress of the wedding!), and we didn't care. We parked the bikes outside and I stood guard while Peter went in to enquire.

I wonder what the concierge thought when a wet, bedraggled and dirty vagrant-looking man asked for a room. She said yes, but they are quite expensive. I could have jumped for joy when Peter came outside to tell me we had a spot! And it wasn't expensive by Aussie standards either!

It was hilarious checking in with all our gear. The foyer is so fancy, with twinkling stars (lights) in the huge domed ceiling. Everyone was laughing at us except the lady standing next to Peter who looked him up and down and turned her back.

We are now installed in our luxurious room, which is well deserved after our hellish day.

It is interesting that the Adventurists plan the Rally from West to East – it's like they're slowly easing us in to the pain and hardship to come the further we progress… smart!

As the only city in the world straddling two continents, tomorrow we get to cross the Bosporus Strait which separates European Turkey from Asian Turkey. Peter and I view this as a milestone, the start of the 'real' Rally, the point at which the fun begins. That crossing tomorrow is symbolic in so many ways, if the measure of fun we've had so far is anything to go by, I simply can't wait to see what the universe has in store for us from this point on… what a honeymoon!

3 thoughts on “Today I got married in Greece, detained in Turkey, and drenched in Istanbul”

Please donate to our super charity by clicking the image

“The Mongol Rally thunders 10,000 miles across the mountains, desert and steppe of Europe and Asia each summer. There’s no backup, no support and no set route; just you, your fellow adventurists and a tiny car you bought from a scrapyard for £11.50”

Get ready to rumble!